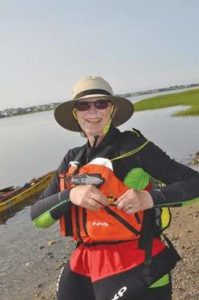 When Dr. Deb Walters saw women and children making their living picking through garbage dumps in Guatemala, she decided to raise money to help them improve their lives. She was inspired by the mothers of the community, and by the model school started by an American.

So the 63-year-old grandmother came up with the idea of kayaking from her home in Maine, down to Guatemala; more than 2,500 miles. Her plan was to publicize her mission along the way.

One small problem: before she started out, in July of 2014, she had had some numbness and tingling. And, with all that sitting in the kayak, the pain intensified.

So, in February 2015, she pulled up her boat in South Carolina and had emergency surgery to correct what turned out to be a massively herniated disk. Recovery from such a procedure is not exactly quick.

Walters has spent the intervening time talking about her project in the U.S., and then catching a ride on a sailboat to Guatemala, where she was honored by the community and the school.

Her plan is to kayak the remaining 1,000 miles this coming year. But wouldn’t we all count her trip already an incredible success?