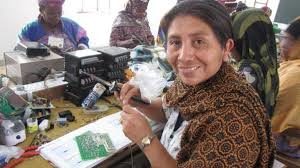 Bunker Roy, the Indian social activist, has a well-deserved reputation for turning assumptions on their heads.

One of his goals has been to introduce solar electricity to poor and rural villages. But when he brought village men to his Barefoot Colleges to learn solar engineering, he called the men untrainable. He said they were “…restless, compulsively mobile, and they all want a certificate and the moment you give them a certificate they leave the village and go to the cities looking for jobs”  So, he thought,  “…why not invest in women, older women, mature women, gutsy women who have roots in the village and train them.”

He brings grandmothers from many different countries to spend six months together learning to install and maintain solar lighting and power. Many of these women have never left home before. Oh, and did we mention that many are illiterate? The training is done primarily with sign language and color-coded circuits.

“We have shown that solar-electrified villages can be technically and financially self-sufficient,” says Roy. He also says, “Every grandmother is a walking, talking Barefoot College.”