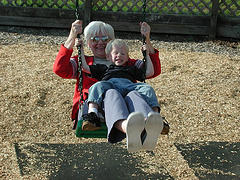 Maybe yes, if having fun is defined as being closer to their grandchildren. It may be the extension of that old saying, “A son is a son ‘till he takes a wife; a daughter’s a daughter for the rest of her life.”

But a new study of Scottish families over more than a decade shows that what you might have suspected does have some basis in fact. If you divide grandparents into maternal and paternal, grandmothers and grandfathers, re-married or re-partnered grandparents vs. original unions, and if you factor in distance, the results are as follows: Maternal grandmothers who live nearby come out way ahead in the closeness sweepstakes. Paternal grandparents who do not live nearby and are re-partnered represent the far end of the spectrum.

Although gender roles have changed quite a bit, yada yada, it is the mother who is still most often the primary caretaker and gatekeeper, the enabler of relationships. And said mother is more likely to be closer to her mother than to her mother-in-law. As you suspected. Case closed