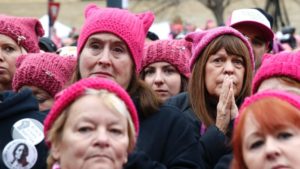 It’s been a quiet few decades on the feminism front. Grandma used to feel sad when she heard that young women didn’t want to identify with the f word, even as they took for granted changes in the work world and on the home front that we, as young women, could only dream of seeing “one day.”

That day has arrived, with women in the Senate, in the Board room, in control of their careers and their personal lives. Sometimes. Or at least a lot more sometimes than back when we formed our young dreams.

But women are once again angry and proud. One of the reasons this current round of outrage has erupted now, is that enough women have enough power that they can stand up to the loathsome behavior that has been commonplace for so long. We, in the second wave of feminism, gave names to some of these behaviors — rape, sexual harassment. We spoke of them in public for the first time. But, in our focus on present and future, we were also well aware that we stood on the shoulders of the first wave of feminists, the suffragettes, who marched through the streets in their long white dresses, demanding that men give them the vote.

So let’s cheer on our daughters and granddaughters, and give ourselves a shout out as well. Each wave may wash out to sea, but another wave will be back, reaching farther up on the beach, bringing us all along with its force.