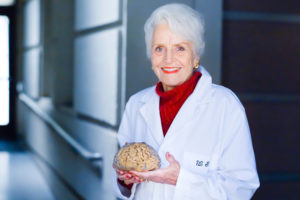 Don’t you just hate that phrase: it’s so simple, even my grandmother can understand it?

Rachel Levy hated it too; so she started a blog called Grandma Got STEM (which stands for science, technology, engineering and mathematics, for you liberal arts majors.)

She called for people to write in about important scientists who just happened to be grandmothers, or vice versa.

You would not believe the response! And the photos! And the history! Women wrote in about themselves, their grandmothers, and famous female scientists. Such as:

Maria Goeppert-Mayer, the first American woman to receive the Nobel Prize in Physics, generated a newspaper headline that read, “S.D. Mother Wins Nobel Prize.” She worked as a volunteer because, since her husband was a university professor, she could not get a university job.

Eve Sprunt, a geophysicist, showed up for a job interview wearing her infant son in a front baby pack and announced, “This is the question you are not supposed to ask.” The interviewer invited her whole family for an on-site interview, babysitting provided.

Neuroscientist Marian Diamond studied Einstein’s brain. But when she had arrived as the first female student in the anatomy department at UC Berkeley, years earlier, the first thing she was asked to do was to sew a cover for a large magnifying machine.

Ursula Franklin was a metallurgist who pioneered the field of archeometry, the science of dating archeologically discovered metals and ceramics. Her research about levels of radioactive strontium in baby teeth factored heavily into the U.S decision to ban nuclear tests.

When Franklin had a baby, in 1955, the committee at the research institution where she worked never managed to make a decision about what she could, or could not do. “The unpreparedness, administratively and legally, to recognize that women, when you employ them, have needs, and require an administrative framework that takes that into account was totally absent. So that the task, then, for women like myself who were feminists, was to know that you had to have laws that gave maternity leave; you had to have provisions for flexible work; and the struggle from there on was not for us, but was struggled for all women to have decent working conditions and safe wages.

“And that’s how it starts.” 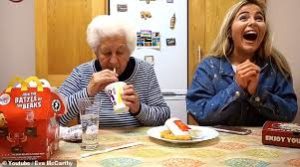 A 20-something Australian journalist decided to spend a week eating the way her grandmother did in 1964: eggs and bacon for breakfast, white bread and baked beans for lunch; and, for dinner, meat, three veg (one always potato) and dessert.

What she learned: Her grandmother never snacked. She cooked and baked all her own food, ate smaller portions, and smoked.

And what did Grandma find when she spent a week trying sushi, red velvet cake, constant snacking, and mega-portions? “By the end of the week, I’m relieved to have finished,” she reported.
But she did enjoy the red velvet cake, which she added to her baking repertoire.